Address by the editor-in-chief

Home | Address by the editor-in-chief 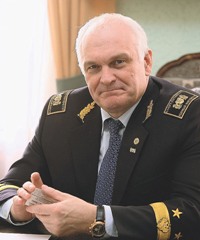 We are glad to greet you on the website, hosting the oldest Russian scientific journal “Journal of Mining Institute”, established by the St. Petersburg Mining University.

St.Petersburg Mining University is a worthy successor to the first technical institution in Russia – the Mining College, founded by Katherine II on 21 October, 1773 in conformity with legacies and ideas of Peter the Great and Michael V. Lomonosov. At the present time the University trains specialists, maintaining and developing further its best traditions, at the premises of the unique technical facilities for the purposes of the mineral resources sector, thereby taking an active part in meeting an overarching challenge posed on the nationwide scale – transition from a resources-exporting to innovation-driven resources-based development model. The University is an initiator and participant of a number of international projects.

The scientific journal “Journal of Mining Institute” was established in 1907 by an outstanding figure in the history of the national science and education, rector of the St.Petersburg Mining University, academician Evgraf Fedorov, on his own initiative. At different times, scientific articles, written by the following academicians, were published: a geologist-encyclopaedist, the first elected president of the Russian Academy of Sciences Alexander Karpinsky; the author of the crystallochemical approach in mineralogy Evgraf Fedorov; an outstanding geologist and talented writer Vladimir Obruchev; the developer of the physicochemical method in metallurgy Nikolai Kurnakov; a renowned geodesist, the father of the national photogrammetry and surveying-geodesic school Nikolai Kell; a prominent geologist and palaeontologist Dmitry Nalivkin; a geologist, the pioneer of naphthology Ivan Gubkin; the founder of the national school of mining mechanical engineering Alexander German; the father of mining aerology Alexander Skochinsky; and many others.

The scientific journal “Journal of Mining Institute” is intended to be an outpost of the mining industry. It is a reputable platform for effective collaboration among domestic and foreign scientists – representatives of various research teams from different lines of research – for the sake of the development of modern science. It is included in the List of leading reviewed scientific publications and journals, approved by the Higher Attestation Commission, and apart from that, in the domestic and international electronic databases: RSCI and GeoRef, CyberLeninka. Thanks to the Internet, articles, published in the journal, are accessible to the international academic community.

On behalf of the St/Petersburg Mining University, I express gratitude to all authors for their involvement, to all readers for their interest in “Journal of Mining Institute”. I invite new authors to participate in the journal life. I sincerely wish to all of you prosperity, sound health, high performance achievements in all fields of professional activity.