This paper considers the problem of electric drive of shearers simulation to assess the indicators of power supply system (PSS) energy efficiency in the context of the introduction of modern devices for controlling the flow of electricity and power. The block diagram of the shearer electric drive simulation model is presented. To take into account fluctuations in the level of consumption of active and reactive power, a model of the executive body of the shearer was used in the work, including a model of the moment of resistance on the auger when cutting. As a result, in the MATLAB Simulink environment, a simulation model of the electric drive of the UKD300 shearer was developed, suitable for assessing the energy efficiency of the electrical complex of mining areas and the feasibility of using modern devices for controlling the flow of electricity and power. As a result of the simulation, it was found that a significant irregularity in the graph of reactive power consumption, caused by repeated short-term operation, makes the use of capacitor units ineffective to compensate for reactive power.

Introduction. Despite the global trend of abandoning hydrocarbon fuels in favor of more environmentally friendly fuel and energy resources, the demand for coal and the development of the coal industry are likely to persist in the coming decades. Thus, the forecast [10] predicts 17 % increase in coal demand under a favorable scenario by 2040 (compared to the level of 2018). The program for the development of the Russian coal industry for the period up to 2035 (hereinafter referred to as the Program) [6] assumes a change in demand for coal by 2035 from –1.16 % (conservative scenario) to +13.95 % (optimistic scenario).

The program [6] envisages increasing the competitiveness of Russian coal companies, including through the technological development of the coal industry: modernization and technical re-equipment; introduction by coal companies of highly efficient coal mining technologies; implementation of digital technologies in the processes of coal mining and processing with elements of the industrial strategy "Industry 4.0".

Professor Yu.A. Plakitkin (ERI RAS) notes [5], that by 2035 the coal production cost should be reduced to 68% compared to 2016. For this, it is necessary to reduce the specific consumption of electricity, which can reach 25 % of the coal production cost. For this purpose, FACTS devices can be used. Prospects for their implementation in PSS of mining enterprises, in particular, high-speed devices for reactive power compensation (RPC) and filtering of higher harmonics D-STATCOM, were considered in works [1, 11].

Due to the fact that FACTS devices have a high speed of response to assess the efficiency of their operation in a coal mine PSS, it is required to take into account the dynamics of mining equipment and the uneven nature of the electrical load. For this, it is necessary to develop a computer simulation model of the PSS of the excavation section of a coal mine and individual electrical consumers. In particular, simulation modeling of the electric drive of the shearer loader is of particular interest, the load graph of which is the most dynamic and has a significant impact on the choice of the location and configuration of FACTS devices, as well as traditional RPC devices.

Formulation of the problem. Simulation modeling of coal mines PSS was carried out earlier by a number of authors. The work [4] presents a simulation model of a coal mine cut-out area, performed in the MATLAB Simulink environment. In this model, the load of mining machines is represented by the Three-Phase Series RLC Load block, which is designed to simulate a static load and does not allow taking into account the dynamic nature of the load of mining electrical equipment. The work [4] shows a simulation model of a multi-motor electric drive system of a mining shearer, also performed in the MATLAB Simulink environment. The electric motors in the model are represented by Asynchronous Machine blocks from the Sim Power Systems library, which allows you to simulate dynamic modes of operation. However, the torque of resistance of the electric drive is set using the Step block, which allows you to simulate a jump-like transition between two torque values. In other words, the moment of resistance of the executive body of the harvester in the steady-state operating mode is assumed to be unchanged, which does not allow to fully assess the nature and dynamics of the power consumption of the harvester. In this regard, these models cannot be used to assess the efficiency of PSS in the context of the introduction of FACTS devices.

The issues of computer modeling of the shearers operating modes were considered in the following works:

• in [13, 14, 16, 19] the modeling of the mechanical part of the shearer and the process of coal destruction is considered; however, these works do not pay attention to the electric part of the electric drive;

It should be noted that the literature contains detailed models of the electric drive of mining machines, taking into account dynamic processes, for example [7, 9], but these models are considered in isolation from the PSS and the rest of the mechanized complex of the mining area.

In this article, a simulation model of the most common type of shearers with an unregulated asynchronous electric cutting drive and a frequency-controlled feed drive is considered.

Methodology. The load of the electric drive of the shearer cutting device depends on the extraction of coal (destruction, removal from the cutting zone, conveyor load) and is determined by the mining and geological conditions of the seam being developed and the technological parameters of the shearer's executive body. The uneven arrangement of the augers causes periodic fluctuations in the moment of resistance on the auger, and the random nature of the change in the resistance of the destroyed coal mass – random fluctuations in the moment of resistance [7].

where Yff – feed force of the i-th cutter; np– number of simultaneously work cutters; D – auger diameter; ZEB(φaug) – function of the cutting element force from the the auger rotation angle.

The "Transmission" block is represented by a two-mass model described by a system of equations [8]:

The "Shearer" block models the moment of resistance for the electric drive of the shearer feed based on the equation [9]:

Figure 2 shows a simulation model of a shearer, made in MATLAB Simulink, corresponding to the block diagram in Figure 1.

Block 2 – frequency converter with a DC link and an autonomous voltage inverter. The capacity of the DC link is selected according to the data of [15].

Block 3 – simulates the moment of resistance for electric motors of the feed drive according to equation (2).

Block 5 – model of the cutting drive transmission, built on the basis of the system of equations (1). 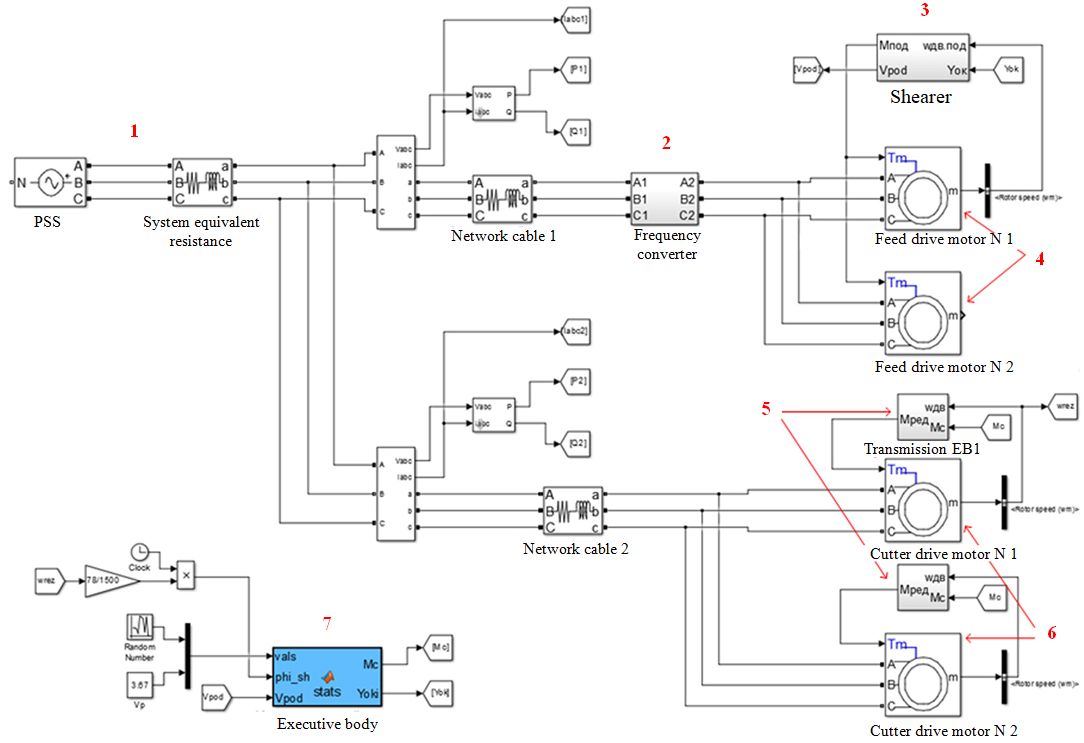 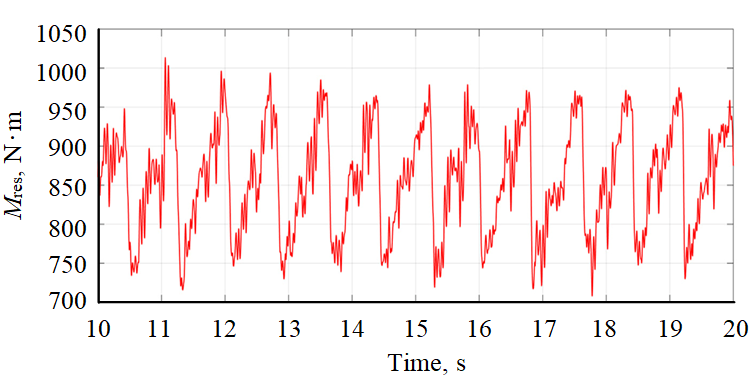 Block 7 – is made in the form of a program code (MATLAB function) that provides the formation of the moment of resistance of the shearer executive body MEB и силы сопротивления подаче комбайна со стороны угольного массива Yff.

Discussion. Shearers operate in intermittent mode. The duration of inclusion on average ranges from 39.5 to 43.3 %. The average number of shearer starts per hour is 80 [8]. Simulation of the shearer operation in intermittent mode with duty cycle (DC) = 66.67 % (tc = 60 s, tp = 40 s) has been performed. The simulation results are shown in Fig.3-5.

Figure 3 shows a graph of the change in the moment of resistance of the shearer-loader executive body over time, reduced to the rotor of the electric motor. Periodic fluctuations of the moment are associated with uneven distribution of cutters, non-periodic random fluctuations are determined by the value of the coal resistance to cutting, which is set by a random number generator according to the normal distribution law. 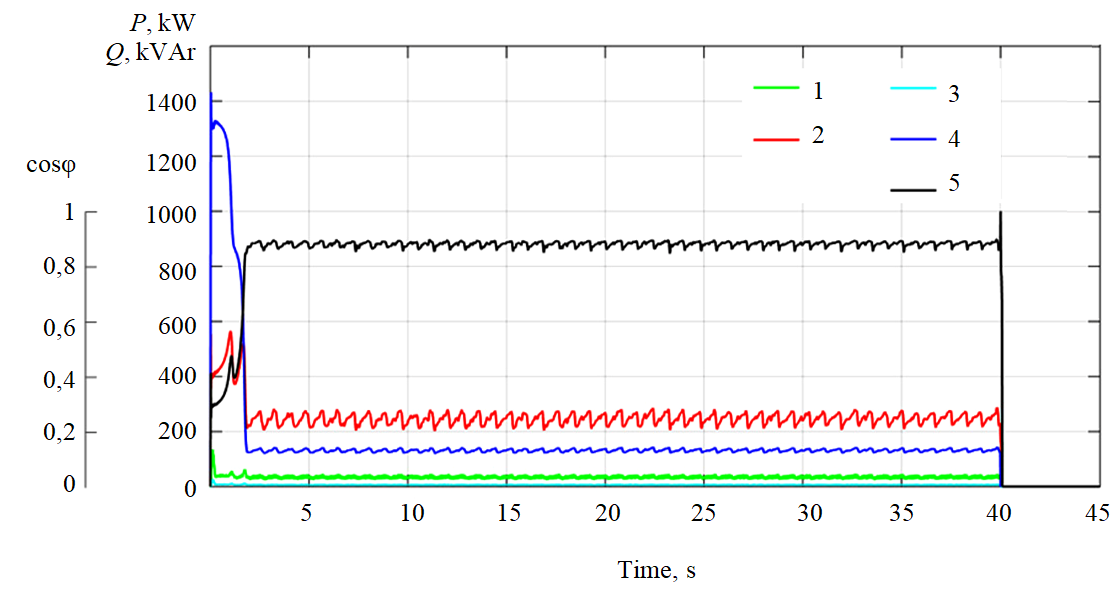 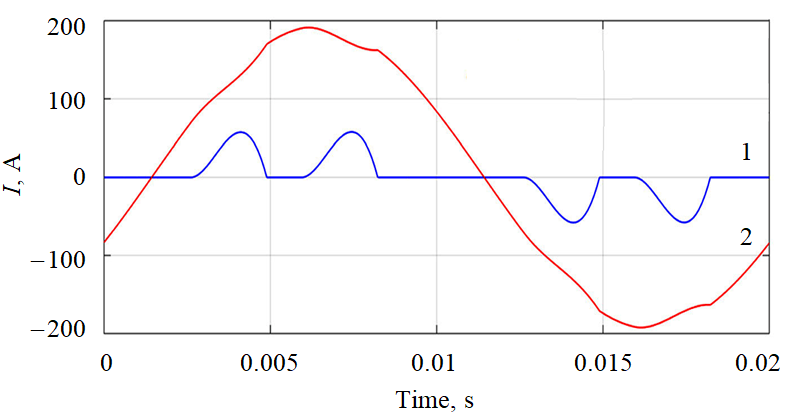 Figure: 5. Current shape of the feed (1) and cutting (2) of electric drive

Based on the simulation results (Fig.4), the shearer requires the introduction of reactive power compensation devices for a short time within approximately 1.85 s after energizing the electric drive (during start-up). Due to the fact that the shearer operates in intermittent mode with frequent starts, it is required from the compensating device to increase the generation of reactive power for a short time every minute. Static capacitor banks are not able to cope with this task due to insufficient speed, therefore, the use of high-speed devices for reactive power compensation based on FACTS technologies is required.

Figure 5 shows the waveforms of the instantaneous values of the current of the electric drive of supply and cutting.

Due to the fact that the feed drive has frequency control, the current consumed by it is essentially non-sinusoidal (THD > 100 %). Due to the fact that the power of the feed drive is several times less than that of the cutting drive, the non-sinusoidality of the total current of the shearer is insignificant (THD = 10 %). Insignificant distortions of the sinusoidality of the current curve of the cutting drive are associated with the appearance of higher voltage harmonics caused by the non-sinusoidality of the current curve of the feed drive. When using frequency control to drive cutting, the total current of the shearer may have significant harmonic distortions, which can make the filtering of higher harmonics in the coal mine PSS relevant. Usually, fast-acting RPCs based on FACTS technology shearer the functions of both a compensating device and an active filter of higher harmonics.

Conclusion. The growth in the power-to-weight ratio of mining equipment creates new challenges in the development of measures to increase the energy efficiency of coal mining, requiring the creation of simulation computer models of the coal mine PSS.

The development of technology for intelligent control of electricity and power flows, in particular FACTS devices, can contribute to a significant increase in the energy efficiency of PSS in coal mines by means of high-speed compensation of reactive power, voltage stabilization and filtering of higher harmonic components. The developed simulation model is suitable for assessing the energy efficiency indicators of the electrical and technical complex of the coal mine excavation and the efficiency of using modern devices for controlling the flows of electricity and power.

4. Kopylov K.N., Reshetnyak S.N., Kubrin S.S. Imitating Modeling of System of Power Supply of the Extraction Site of the Coal Mine. Mining informational and analytical bulletin. 2016. N 12, p. 40-50 (in Russian).

9. Tkachev V.V., Bublikov A.V. The use of simulation modeling to study the automatic control system of a mining shearer. Dnepropetrovsk: Natsionalnyi gornyi universitet, 2015, p. 182 (in Russian).