Rare earth elements (REEs) are valuable and strategically important in many high-technology areas, such as laser technology, pharmacy and metallurgy. The main methods of REE recovery are precipitation, extraction and sorption, in particular ion exchange using various sorbents, which allow to perform selective recovery and removal of associated components, as well as to separate rare earth metals with similar chemical properties. The paper examines recovery of ytterbium in the form of coordination compounds with Trilon B on weakly basic anion exchange resin D-403 from nitrate solutions. In order to estimate thermodynamic sorption parameters of ytterbium anionic complexes, ion exchange process was carried out from model solutions under constant ionic strength specified by NaNO 3 , optimal liquid to solid ratio, pH level, temperatures 298 and 343 K by variable concentrations method. Description of thermodynamic equilibrium was made using mass action law formulated for ion exchange equation and mathematically converted to linear form. Values of equilibrium constants, Gibbs free energy, enthalpy and entropy of the sorption process have been calculated. Basing on calculated values of Gibbs energy, a sorption series of complex REE ions with Trilon B was obtained over anion exchange resin D-403 from nitrate solutions at temperature 298 K. Sorption characteristics of anion exchange resin have been estimated: total capacity, limiting sorption of complex ions, total dynamic capacity and breakthrough dynamic capacity.

As a result of REM market analysis, a conclusion can be drawn that in 2014-2017 REM extraction rate was relatively stable, and starting from 2018 it dramatically increased from 132 to 170 thousand tons [3]. In terms of resources, the key leader of the last decade still is China with a market share of 37.89 %, Brazil and Vietnam follow with equal shares of 18.94 %. Russia is also not the last country on this list with a share of 10.33 %. Other countries worth mentioning are Australia, the USA, Malaysia and India, which also have estimated REM reserves [3].

Presently Russia does not produce but rather imports rare earth elements (REEs), which negatively affects the economy of the country and its industrial sector in particular.

The main target source of REEs in Russia is located in Murmansk oblast, at Lovozero deposit. There is also associated extraction of REMs as a component of other ores and waste products [6, 15, 16]. However, in Russia there are no deep processing facilities, so it impossible to obtain the final product in the form of individual REMs. As a result, extracted REMs are exported as cheap collective concentrates.

The main methods of REE recovery are precipitation, extraction, and sorption [5, 8, 12, 13, 18]. Sorption processes are the most promising method of selective REM recovery from multisalt solutions, which allows to separate elements from their associated components, as well as to separate REMs with similar chemical properties [10].

Authors of paper [7] studied recovery of Nd, Gd and Ho on synthesized resins, the functional group of which is represented by primary amine surface groups with REM-binding ligands: phosphonoacetic acid (PAA), N, N-bis (phosphonomethyl) glycine (BPG) and diethylenetriaminepentaacetic dianhydride (DTPADA). In order to estimate thermodynamic characteristics, a series of tests was performed with solutions, containing 0.3-300 mg/l of REEs at constant HCl concentration of 0.5 mol/l and a fixed pH value. Solutions were mixed at 300 rpm for 24 hours with ion exchange resin (10 g/l) at three temperatures: 20, 60 and 100°С. Sorption isotherms were obtained in constant presence of NaCl (0.5 mol/l) and fixed pH values, dependent on synthesized anion resin: 6.5 for amine, PAA, BPG or 2.5 for DTPADA, at temperatures 20, 60 and 100 °С. Thermodynamic description was made using Langmiur and Freundlich models. As a result, the authors calculated values of equilibrium constants, Gibbs free energy, enthalpy and entropy of Nd, Gd and Ho extraction.

In paper [14] the authors examined separation of metals based on ion exchange displacement of metal ions (Se, Re, Mo, La, Sc, Ce (IV)) from the solid phase on ion exchange resins Purolite A170, Lewatit M500 and Lewatit SP112. Effective separation of cerium (IV) and lanthanum was observed on Lewatit MonoPlus SP 112 (Na+). Ion exchanger saturation was conducted under dynamic conditions with a lanthanum nitrate solution. Then elution with cerium (IV) nitrate solution was carried out. In the course of experiment, it was observed that cerium (IV) displaced 96-97 % of lanthanum from the solid phase of the resin. The process of frontal-gradient displacement of lanthanum by cerium (IV) was a part of the developed technology. Total coefficient of cerium and lanthanum separation using designed extraction method was 4300. Distribution coefficients for cerium and lanthanum were 1000 and 0.23, respectively. This method allows to extract cerium (IV) with the purity of 99.9 %.

Likewise, for extraction of such metals as thorium (IV) and uranium (IV) in the study [17] authors used solid sorbents with a resin matrix in the form of monomer 2, 4, 6-triformylphloroglucine and 2,5-diaminobenzenesulfonic acid (COF) and functional groups COF-SO3H and \(\mathrm{[NH_4]^+[COF-SO_3^-]}\). The paper estimates the impact of pH on thorium (IV) sorption capacity in the interval 1-2.8. A conclusion was drawn that for sorbent \(\mathrm{[NH_4]^+[COF-SO_3^-]}\) with the growth of pH its capacity increased from 98.8 (рН = 1) to 168 mg/g (рН = 2.8). A similar tendency was observed for sorbent COFSO3H, however, a decrease in pH level resulted in declining capacity values. Research on kinetic dependencies demonstrated that within 10 minutes of the experiment capacity value reached 232 mg/g from the solution with thorium (IV) concentration of 125 ppm at pH = 2.8 on the sorbent \(\mathrm{[NH_4]^+[COF-SO_3^-]}\) and 100 mg/g on the sorbent COF-SO3H. Sorption isotherms obtained in the interval of concentrations 50-400 ppm were analyzed using Langmuir model. Resulting capacity value was higher for sorbent \(\mathrm{[NH_4]^+[COF-SO_3^-]}\) than it was for COF-SO3H. The authors separated thorium (IV), uranium (IV), cerium (III) and europium (III) and obtained the following coefficients of element separation: STh/U = 9,4, STh/Eu = 9,4 и STh/Ce = 10,3.

Problem statement. Analysis of literature references allows to come to a conclusion that REM recovery from multisalt systems [11] is a relevant topic due to the complex character of REM sources. Values of obtained thermodynamic characteristics of the sorption process, namely of ion exchange, define not only conditions of running the process but also technological parameters of ion exchangers for REE separation and removal of associated components. Basing on Gibbs free energy of ion exchange process, it is possible to predict the efficiency of lanthanide recovery from aqueous salt solutions. Taking into account that REE recovery is usually performed from solutions of mineral inorganic acids, used as leaching solutions for phosphogypsum or other REM-containing materials, the paper focuses on ytterbium recovery in the form of anionic complexes with Trilon B on weakly basic anion exchange resin D-403 from nitric acid solutions.

Experiment methodology. Static sorption examination. Examination of REE sorption was carried out from model solutions, containing anion complexes of ytterbium with Trilon B (EDTA ytterbiate ions), obtained by adding Trilon B to ytterbium nitrate solution with a precise mole ratio of 1:1 in accordance with the reaction stoichiometry [9].

As an ion exchange resin, the authors utilized anionite D-403 in a nitrate form (China), which is a polystyrene chelate anionite with a divinylbenzene-styrol matrix and a functional group in the form of tertiary nitrogen atom with oxyhydrilic groups in positions β, γ and δ, which decrease the mobility of a lone-pair nitrogen electrons as a result of negative inductive effect [9]:

The solution and anionite were mixed at the rate of 120 rpm in a GFL thermostated cabinet (Germany) for 5-6 h until it reached equilibrium. Ytterbium concentration in the initial and equilibrium solutions was measured using spectrophotometric method with arsenazo (III) and X-ray fluorescence method on Epsilon 3 spectrometer (produced by PANalytical).

Dynamic sorption examination. In order to confirm the values of limiting sorption, saturation of D-403 anionite with EDTA ytterbiate ions was performed under dynamic conditions. The experiment took place in a sorption column with diameter of 1.2 cm and anionite layer height of 31.5 cm, the mass of anionite was 11.3 g. Solution containing 0.0398 mol/l of EDTA ytterbiate ions was passed through the column at a rate of 1 ml/min using peristaltic pump LOIP LS-301 (JSC “Laboratory Equipment & Instruments”, Russia). On column exit the solution was sampled by 5 ml until the breakthrough and by 10 ml after the breakthrough until the initial concentration was reached.

Sorption isotherms are presented in Fig.1. 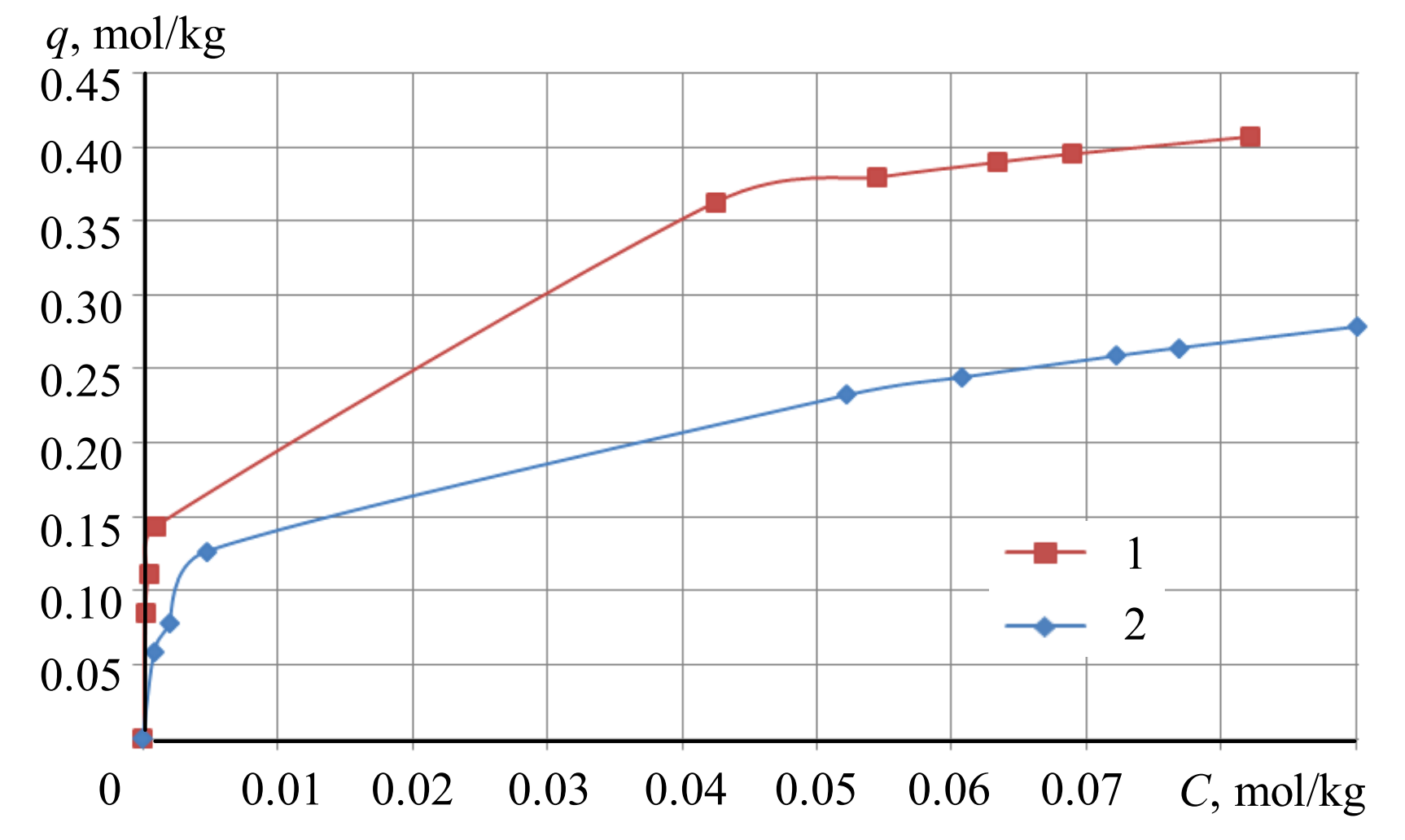 Assuming that limiting sorption is composed of equilibrium sorption values of nitrate and EDTA ytterbium ions:

the mass action law can be converted to linear form, similar to Langmuir sorption isotherm

Taking into account the impact of temperature, activity coefficients were re-estimated using formula

Calculated and experimentally obtained data for mathematical description of linear-form sorption isotherms of ytterbium on D-403 anionite from nitrate solutions at temperatures 298 and 343 K are presented in Table 2.

Linear forms of sorption isotherms are presented in Fig.2. 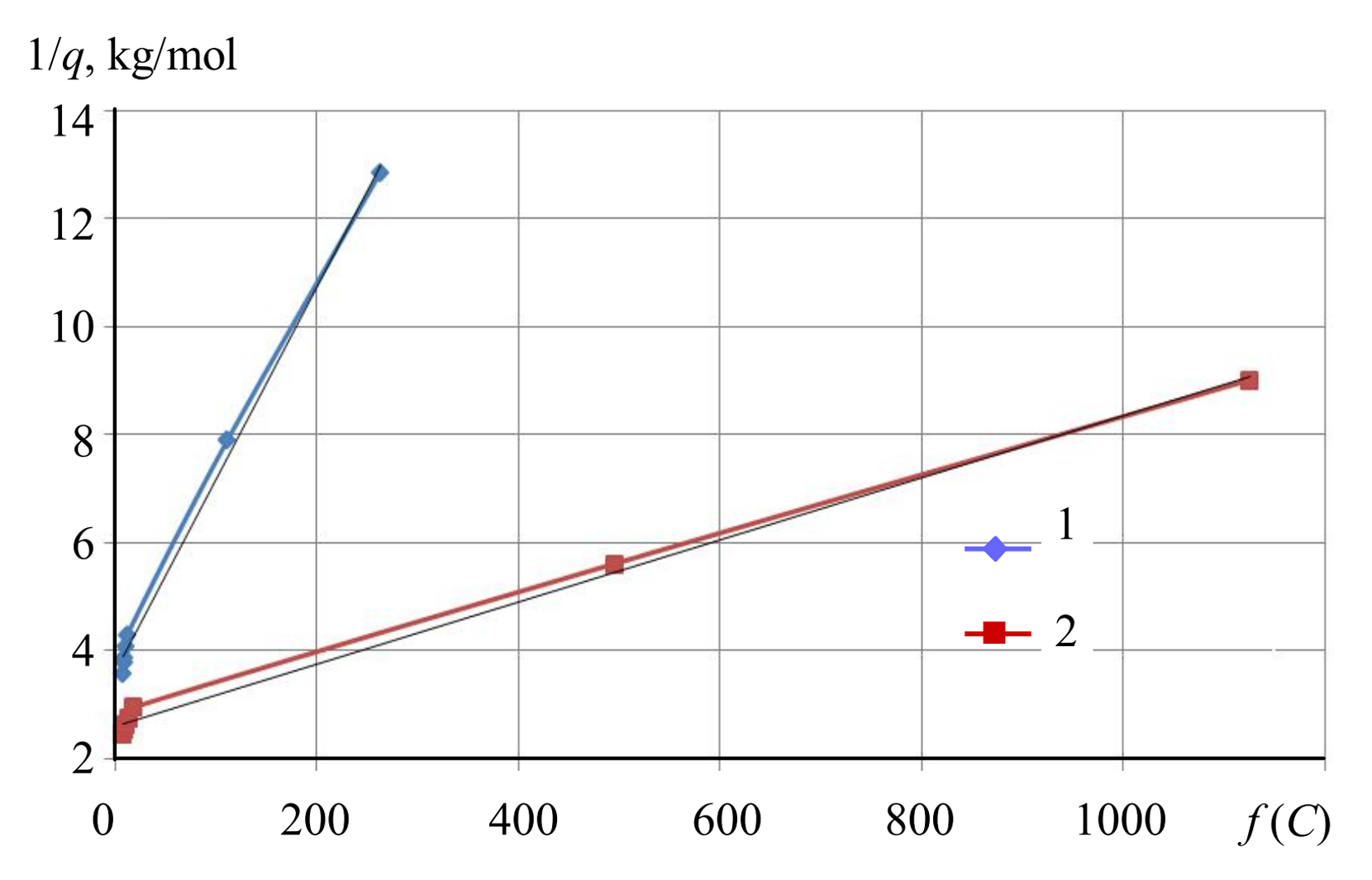 Thermodynamic and sorption characteristics are presented below:

The following values were obtained:

It happens due to the specific character of ligand coordination against REE ion of light and heavy groups [2]. The inner sphere of [YbTr]– and [ErTr]– complexes is composed of two nitrogen atoms and four carboxyl groups, whereas [CeTr]– and [YTr]– complexes contain two nitrogen atoms and only three carboxyl groups (Fig.4). An increase in effective negative charge of complex erbium and ytterbium ions leads to an increase in electrostatic interaction with the matrix of ion exchange resin. As a result, with diminishing atomic radius and elevating effective charge of the complex, chemical affinity to the solid phase of anion exchange resin increases.

Coordination compound of ytterbium )а) and cerium (б) with Trilon B

Limiting sorption value of complex ion agrees with the values of total anionite capacity at both temperatures. With rising temperature the sorption value increases, as the equilibrium shifts in the direction of nitrate ion displacement from the matrix of ion exchange resin by EDTA ytterbiate ions.

Enthalpy value is positive, but the defining factor of decreasing Gibbs energy \({\Delta{G_{T}^{0}}}\lt0\) in the course of ion exchange with rising temperature is an entropy criterion. Obtained thermodynamic data characterize selectivity of ion exchange between EDTA ytterbiate ions in the REE array and \(\mathrm{{NO_{3}^{-}}}\) on the surface of ion exchanger. The fact that complex ion sorption does not reach the value of limiting sorption is explained by the large geometric size of EDTA ytterbiate ion.

Conclusion. The paper examined ytterbium sorption in the form of anionic complexes with Trilon B from nitrate solutions at constant ionic strength of 1 mol/kg, рН = 3, L/S ratio =5 and temperatures 298 and 343 K on weakly basic anion exchange resin D-403.

Mathematical transformation of mass action law was performed, as it was converted to a linear form similar to Langmuir equation, the graphic solution of which allowed to calculate thermodynamic parameters of ion exchange process.